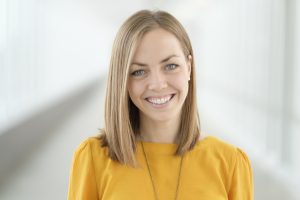 Lauren experienced a normal childhood, free from trauma. But as a teenager, she struggled with mood problems and apathy. She also experienced thought broadcasting, believing that others could hear her thoughts. Though symptoms caused her to skip classes, she maintained decent grades. These early warning signs went unnoticed.

After high school, Lauren began studying political science and psychology part time at the University of Alberta. A few months into college, at age 19, her boyfriend noticed something was wrong, and convinced her to see a family doctor. She was diagnosed with depression. At that time, she also experienced highs which led to higher productivity, and she embarked upon “adventures,” such as traveling and running in the mountains. For years, she never discussed these elevated moods with her doctor.

In 2011 Lauren decided to pursue a career in social work and transferred to the University of Waterloo in Ontario in order to complete her Bachelor of Arts degree in Social Development Studies. She won several scholarships and awards, and successfully graduated in 2013.

At age 22, Lauren decided to pursue a second bachelor’s degree in social work. However, at this time, she began to experience her ﬁrst thoughts of suicide and sought counseling at the university. Her diagnosis was changed to bipolar disorder, type two.

A few months later, in winter of 2014, she over-dosed, which lead to her ﬁrst hospitalization. On her release, she experienced hallucinations, hearing someone in the distance saying her name. She also sensed terrible smells, which were olfactory hallucinations.

A year after her ﬁrst hospitalization, Lauren overdosed again. This was a more serious attempt and she was placed on life support for several days.

After her release from the hospital, Lauren returned to full time school at the University of Waterloo and seemed to be doing well. However, shortly after her release, at age 24, she experienced her ﬁrst full blown psychotic episode. She struggled to sleep, and was full of “paranoid energy.” Her new psychiatrist changed her diagnosis again to bipolar one with psychotic features. After her discharge from the hospital, she graduated with her second bachelor’s degree in spring of 2016.

After the completion of her social work bachelor’s degree, Lauren landed her dream job as a researcher for Cancer Care Ontario in Toronto. But unfortunately, her hallucinations had never fully gone away. Believing that her medication was poisoned, and outside forces were controlling her mind, she discontinued all medication. Off medication, she experienced her second full blown psychotic episode. This time, Lauren’s diagnosis was changed to schizoaffective disorder. She was 25 years old.

Lauren remembers her diagnosis as a relief. It ﬁnally provided an explanation for what was happening inside of her mind. She spent a difﬁcult month in an Alberta psychiatric hospital but ﬁnally regained stability on a newer injectable medication.

Following her ﬁnal hospitalization, Lauren began looking for her “new normal.” She found it especially hard to deal with the stigma of schizoaffective disorder. Lauren beneﬁtted from the Schizophrenia Society of Alberta, where she met others who were thriving despite a psychiatric diagnosis.

Today, Lauren is a successful student in her Public Health graduate program and once again enjoys working as a research assistant. She lives a meaningful and productive life and has not been hospitalized since October of 2016.

Lauren maintains a YouTube channel about her recovery called “Living Well with Schizophrenia.” She shares the message that there is no shame in having severe mental illness, and that with medication and treatment, it can be overcome or managed. Although her road to recovery was at times very challenging, today she is thriving. Lauren is living proof that recovery is possible.