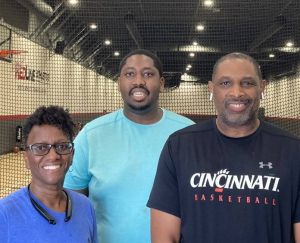 In 2005, Lynette and Jayson Gee’s son Brandon developed schizophrenia at the early age of eleven (developing schizophrenia below the age of thirteen is exceedingly rare at one in 35,000). He was originally told by his doctors that he would be in day treatment, facility group homes and hospitals for the rest of his life. Choosing to rely on their Christian faith and believing Brandon would be healed, the Gee’s stayed the course and walked alongside their son on his journey to full recovery.

Brandon was initially treated in a mental health treatment facility located an hour and a half from the Gee’s home, but Jayson committed to visiting his son almost every day over a six month period. Jayson assured Brandon that his time of illness was temporary, never giving up hope. Brandon’s doctors were surprised at how often Jayson visited his son, and encouraged him to not come as often, telling him that seeing Brandon was a waste of time. And in his illness, Brandon wanted nothing to do with his father.

It was emotionally exhausting and difficult as Brandon continued to struggle after trying over 10 different medications. The Gee’s journey involved multiple hospital stays, group homes, respite care, and day treatment facilities and schools.

The Gee’s moved to Cleveland, Ohio in July 2006 and were determined not to leave Brandon in his group home in New York. After living in Ohio for a year, their doctor informed the Gee’s of a study being conducted at the NIH on adolescents taking clozapine. In August of 2007, Brandon began clozapine treatment and within less than 6 months his hallucinations disappeared.

Thanks to treatment with clozapine, three years later, Brandon made a full recovery and moved back home. He returned to high school, played competitive varsity basketball again and enjoyed a normal life. He graduated from high school in 2012. Today, Brandon is 27 years old and celebrating 13 years in full recovery. He is an honor student majoring in business management at Cincinnati State University. He has also held numerous jobs as a basketball high school and middle school coach and worked at the YMCA.

When asked about her journey as a caregiver, Lynette shares, “This journey caused me to evaluate my faith. I questioned, what did I truly believe, not only when things are going well in life but when you hit the rocky times. I wanted to hide what our family was really going through. The silence and not being able to share with someone was presenting even more problems. I found out that there are people who want to help and serve the best way they know how. When I became more transparent, God’s love towards me was shown in and through his people. That’s why I consider it an honor and privilege to be a support for someone else.”

As is often the case, Lynette discovered that other family members had suffered with mental illness and schizophrenia.

Lynette is a teacher, entrepreneur and mother of three. Over the years she taught high school and junior college math. She also worked at Packard Electric as an industrial engineer, and in sales in the pharmaceutical industry. Today, she works with Gee Coaching, doing seminars and training for educators, and individual health coaching.