There is a misperception by some members of the public that persons suffering from psychosis can be dangerous. This negative view may be due to old Hollywood movies or alarming newspaper headlines. In fact, very few crimes have been perpetrated by individuals with severe mental illness, and if they are, effective treatment could have prevented any acts of aggression by someone who suffers from paranoid delusions or hallucinations.

The vast majority of persons with psychiatric brain disorders are not dangerous, and in fact are more likely to be victims rather than perpetrators of crime. But what does it take to convince individuals who need psychiatric medical care to get treatment, and to help them remain in treatment?

The CURESZ Foundation believes that the central issue is to deliver the highest quality, evidence-based care to those who need it, in order to help them to recover from their illness, and return to school or work or volunteering, so they can have a meaningful and productive life. Once they engage in the right treatment plan and return to their baseline, it is vital that they will adhere fully to their treatment for the long-term.

Unfortunately, some physicians still use old antipsychotic medications introduced decades ago in the 1950s and 60s, which may have intolerable and serious adverse reactions. Unable to live with such side effects, many patients decide to go off medication and become afraid to try other medications, assuming that all medications will have similar side effects. In some cases, they may decide never to take psychiatric medication again.

In other cases, treatment may enable a person to improve enough to leave the hospital, but the individual remains functionally disabled. Thus, controlling the acute symptoms and getting discharged from the hospital does not mean that the treatment is completed.

Severely mentally ill persons discharged from hospitals often remain in a state of incomplete recovery for years. They cannot work, volunteer or enjoy a meaningful life because they are not well enough and continue to have residual symptoms. Oftentimes, some effective but underutilized medications that can help them recover completely are not used or even offered as an option to the patient.

The CURESZ Foundation provides education about underutilized and cutting-edge medications and treatments for schizophrenia and offers medical updates about alternative treatments to the public, as well as clinicians and treatment teams. We want you to learn about treatments that may radically change your life, but which are not being discussed or offered to you.

The CURESZ Foundation provides education about underutilized and cutting-edge medications and treatments for schizophrenia. This includes information about the unique medication clozapine, which is the only FDA-approved medication for cases of treatment resistance. It also includes long-acting injectable medications (LAIs) which are convenient for persons with schizophrenia and effective at preventing relapse and rehospitalization.

The CURESZ Foundation has assembled a Clozapine in Schizophrenia Expert Panel (CLOSZE). Persons with schizophrenia who continue to have delusions and hallucinations, or who experience suicidal ideas, and are willing to see if clozapine can help them recover, can log on to our website and find the clinician on the Panel who lives closest to them, and contact that psychiatrist for another opinion.

The CURESZ Foundation has also created a Tardive Dyskinesia Expert Panel. Tardive dyskinesia is an involuntary movements side effect of long-term treatment with the older antipsychotics. Persons with schizophrenia who are experiencing tardive dyskinesia can use the Panel to find a clinician who lives closest, and obtain a second opinion about one of the FDA-approved tardive dyskinesia medications, both of which became available in 2017.

CURESZ features stories of Schizophrenia Survivors who are not just recovered but are thriving despite a past diagnosis of schizophrenia. Through our Survivor’s stories, we demonstrate that full recovery from schizophrenia is actually possible.

The CURESZ Foundation also seeks to correct many misconceptions about schizophrenia, and to find practical and effective ways to eliminate the stigma attached to it. CURESZ educates students, mental health professionals, patients, families, and the general public through various media platforms.

CURESZ is particularly interested in educating teenagers and college-age young adults about the early warning signs of schizophrenia, which often do not start until adolescence or the early 20’s, as well as other psychiatric conditions such as bipolar disorder, depression and anxiety. We reassure students that serious mental illness is a medical illness, like hypertension or diabetes, and that there should be no reluctance in taking a medication for any illness, including brain disorders. Our first CURESZ club at the University of Cincinnati was established in 2020, and we seek to establish other CURESZ clubs at colleges and universities around the country.

The CURESZ Board of Trustees includes well-known psychiatrists, lawyers, parents of mentally ill persons, and other professionals from around the country. Bethany Yeiser serves as President of the CURESZ Foundation, and Dr. Nasrallah as Executive Vice President and Scientific Director. The Foundation Officers also include a Secretary and a Treasurer.

The CURESZ Foundation seeks contributions to conduct and fund educational and research projects that study risk factors for schizophrenia and related psychotic disorders such as bipolar disorder, and coping strategies for patients and their families. See more on our mission and vision.

The CURESZ logo is created from a silver ribbon (the color associated with schizophrenia) which makes up the left part of the “C.” Schizophrenia is abbreviated as “SZ,” and the green color, the official color for mental health. The shooting star symbolizes the encouragement associated with overcoming schizophrenia via prevention, treatment, and eventually a cure, but this “star” also has a deliberate resemblance to a neuron with its axon, symbolizing schizophrenia as a neurobiological condition.

The CURESZ Foundation was founded jointly by Dr. Henry A. Nasrallah and Bethany Yeiser in July 2016. Bethany was diagnosed with schizophrenia in 2007. Under the care of her psychiatrist, Dr. Nasrallah, it became apparent that she was “treatment resistant,” because of persistent auditory hallucinations. Thanks to treatment with clozapine, Bethany’s symptoms disappeared completely, and she returned to her former self, allowing her to reengage in relationships, study, play the violin, and enjoy life with family and friends. 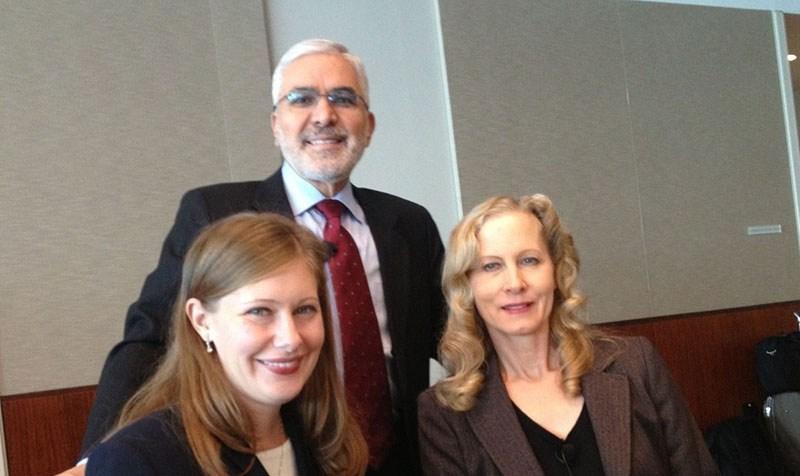 Through her partnership with Dr. Nasrallah and the CURESZ Foundation, she hopes to offer persons with schizophrenia, their families, clinicians and the general public needed information about schizophrenia.