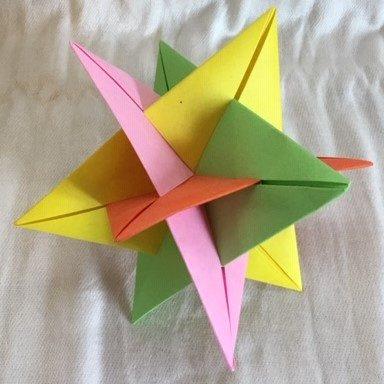 The image is called “The WXYZ,” designed by Tung Ken Lam, and folded by Joy.

I grew up in Ohio and experienced a happy childhood with loving parents. I was involved in many activities, including dance, cross country, band, and church. However, I remember having intense mood swings as early as second grade. They affected relationships with my family and friends, but my mood swings were not recognized as a sign of a mental illness.

In 2003, I graduated from high school and went to study at The Ohio State University, where I expected to meet life-long friends. Interacting with people in purely social situations has never been easy for me. In the loosely structured environment of a very large university, I struggled to make close friends.

It was not until my mid-twenties when I began graduate school that my emotional state became unbearable. I couldn’t stop crying. Finally, in 2010, I went to see a counselor who recognized my depression and recommended group therapy. For a couple of weeks, I participated in short-term group therapy, which did make me feel better. Unfortunately, I was disillusioned as I continued to struggle with my emotions day-to-day.

I persisted in my studies and earned my master’s in teaching English in 2013. My hope was that if I could get a job I enjoyed, I would be able to keep it long-term. During my teens and twenties, I had held numerous jobs, but was unable to keep most jobs for more than a year or two. Sometimes the job stress was overwhelming and other times I simply struggled because interacting socially was difficult.

So with my degree in my hand and hope in my heart, I left to teach English in China in 2013. Experiencing a new country and culture, I was flying high, living my dream, and enjoying my life.

Yet, over the next two and a half years in China, I became even more isolated. My loneliness finally pushed me over the edge. I was paranoid and suffering from terrible anxiety. Delusional, I lost the ability to cope, do my work, and live my life. In my delusional world, I thought I was going to be framed for a crime and used for nefarious purposes, so I committed acts of self-harm and fanaticized about committing suicide.

Upon my return from China, I ran away from my family and began living on the streets, experiencing starvation, illness, and emaciation. By far, the worst experience was the terror going on inside my mind. When I allowed myself to start eating again, I began to feel better emotionally, but I was still delusional. My belief was that I could not accept help from anybody or go to a homeless shelter, so I ate out of dumpsters. During this time, I refused contact with my parents. Later, I discovered they were afraid that I was either dead or in serious trouble. My parents did everything they could to find me. It was not until they later received my emergency room bill that they found me and we were reunited.

The emergency room bill was incurred when I decided, after several months on the streets, to go to a hospital. A kind police officer picked me up off the side of a highway and dropped me off in the hospital. Although I initially did not believe I had a psychotic illness, I did realize I was ill. I was open to learning about my condition, which was diagnosed as schizoaffective disorder, bipolar type. To this day, I have consistently taken medicine since late 2016.

But even after several years following my hospitalization, I still suffered from paranoia and anxiety, and had trouble leaving the house, spending time with friends, and looking for a job. Finally, in mid 2018, I did find a sales position and started working 40 hours per week. My job has given me a sense of normalcy and self-worth, and I am now much healthier than I was before starting.

Today, I am happier than I’ve been in a long time. Working and commuting take up much of my time and leave me tired, but I am able to still practice self-care.

Exercising regularly and running half marathons keeps me healthy and boosts my endorphins. Participating in a local origami group provides a supportive learning and teaching environment. Knitting, crocheting and sewing clothing items and blankets provides a creative outlet and is a form of self-expression. Gardening and yard work keep me in touch with nature and provide a sense of well-being.

Living at home, I enjoy the emotional support of my parents, who were relieved to find me alive in a homeless shelter. They are happy to have me living with them now, and are supportive of my recovery and efforts at self-care.

I have also benefitted from attending local Schizophrenics Anonymous (SA) meetings where I have met friends and can interact with people who understand my day to day experiences living with a psychotic illness. I have attended SA for several months now.

Everyone and every situation is different. For me, work has been healing and helped me recover from my illness. If you want to work, I encourage you to look for a supportive environment and try. You may find that it does you a world of good.