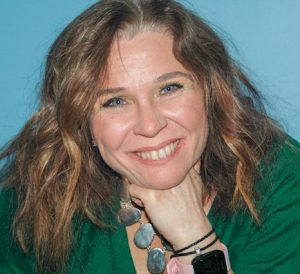 I grew up in a small town in Upstate New York. My childhood was normal, uneventful, but happy. However, even in elementary school, I perceived I was different from the other kids, which made me uneasy. By high school, I was having delusions, believing there were monkeys living in my parents’ home. As I grew older, I thought of suicide, but I hid these feelings from my family.

High school was difficult, but there were bright spots. I studied photography, excelled in English, and was editor of the school’s small paper. I was also secretary of the AIDS Committee for the school. Looking back, I believe I was experiencing a mania which enabled me to accomplish all these things. Some days, I would crash hard and go into a very dark place. Fortunately, I had two terrific friends who knew I was struggling.

I managed to graduate high school in 1988 and started college the next fall at SUNY Farmingdale where I studied graphic design. Far away from my family, I experienced an increase in symptoms. I thought my roommate was trying to kill me and that my room was bugged with cameras which were monitoring me.

Needless to say, I didn’t do well my first year in college. I came home in mid-April before the school year ended without finishing my freshman year. When I arrived at home, I felt healthier in a safe and familiar environment with my family. But my parents thought I came home early for another medical reason, and did not suspect anything was wrong with my mind.

The summer after my freshman year, I started working for a florist, and loved it. I assisted with orders during the day and learned how to design arrangements. I also learned how to make the perfect bow, and many other elements that I still find useful now. I worked there for four months.

I met my husband in October 1989, and we married about eight weeks after we met. I became a mother the same year. During this time, my delusions were ever present and increasingly annoying, but I still held it together.

After my second son was born, my husband started noticing something was not quite right with me. My husband was in the Navy, and we moved to Italy when I was 26 and pregnant with my third son.

Italy was fantastic. The country and people were amazing.  We lived on a small island in the middle of the Mediterranean Ocean.  I was happy mostly, but at the same time, my mental health began to spiral downhill.  I was unpredictable and edgy. My husband was walking on eggshells, unaware of what would set me off.  He did not realize that my delusions were increasing and getting more prevalent with each passing day.

After we moved back stateside from Italy, my husband finally convinced me to seek help for my depression and erratic behavior. I was hiding my true symptoms from everyone, aware that most people did not think there were monkeys in their homes. I finally went to a doctor who started me on medication for what she thought was bipolar disorder. I did not stay on the meds she prescribed because they were not working, and I hated the way they made me feel. I stopped going to the doctor altogether. I believed I could manage my symptoms on my own as I had done most of my life. My family moved to Ohio from Washington State the same year, in 2004.

My husband and I were not doing well as a couple. The stress of my untreated schizophrenia was taking its toll on us, though we did not yet know it was schizophrenia. One day, after an argument with my husband, I revealed to him that I was suicidal, and he took me to the hospital. This was the first of many stays in the behavioral health unit.

Shortly after my first hospitalization, I had my first psychotic break.  I was actually seeing and hearing the monkeys in my home. I thought they were in the basement keeping me from doing laundry.  I was on the phone with a friend of mine and mentioned to her I couldn’t do laundry because of them.

I was in and out of the hospital over the next few years trying to find the right meds and the right treatment team.  I was still not very forthcoming with my doctor about all my symptoms, so it took about four years to find the right medications for me. It took another three years to find a treatment team that I felt I could trust and that I liked. Finally, my team identified what was wrong and gave me a correct diagnosis of schizoaffective disorder.

The transformation after finding the right diagnosis and a great treatment team was amazing.

Following my recovery, I became the loving and present mom that my three sons badly needed. I also began going to school for massage therapy while we were living in Washington state. Then we moved to Ohio, where I started working for a wonderful company.

But despite success in both my work and family life, I was still not taking my medication consistently.  I would take it until I felt better then stop, thinking I didn’t need it anymore. I was hospitalized a few more times but still did not understand that I was only temporarily doing well because of my medication. During my final hospitalization, I realized that I did not want to ever relapse again, and began to faithfully take my medication

In 2013 I went back to school again to be an esthetician and started my own business.

It was hard but I was relatively successful.   I loved being an esthetician almost as much as I loved my new job as a massage therapist.  I ran my business successfully for two years.

By 2015, I was working at another company along with working as a lead esthetician. But finally, the stresses of working two jobs for almost 60 hours per week along with raising a family became too much for me to handle.  In 2015 I wound up having another bout of hallucinations and delusions, and had to close my business.

I was devastated. I hated giving up what I loved doing and a business that I was working hard at.

This time, I worked closely with my doctor and was not hospitalized.   I also joined a support group for people with psychotic illness.  It happened to be a step group similar to AA.  I took the steps to heart. I practiced them everyday, and I came to the realization that I needed to change my life and get my illness under control once and for all.

This included many things, but the top three were (1) my weight loss journey (2) starting a journal which gave me a place to express my thoughts, struggles, and feelings without being judged, and (3) discovering the world of daily planning. Daily planning gave me a sense of control over my life and my illness, and also gave me a creative outlet.  As I focused on these three things, I was truly doing well for the first time in my whole life.

That same year, I was approached by the leader of my support group and asked to come to the hospital where he volunteered to tell my story of success.  I have been telling my story of recovery for almost five years now, and I enjoy it immensely.

In 2019 I started Project Daily Pages, which is a non-profit organization that helps those with mental illness live in recovery to the best of their ability by providing tools, materials, instruction, and support. The goal is to allow them to live more stable, more productive, and more successful lives, as I have found personally.

I am living in recovery now. To the best of my ability, I hope to help others learn helpful techniques I have learned mostly by trial and error over the years. Today, I am happy, successful and free from nearly all my symptoms.

As I do what I love, which is helping people, my family truly supports me. I would not know what to do without them, especially my husband of 30 years.  We have been through a lot together. My boys are grown now. They give me a reason to take my medication. I stay healthy for my family.

What I want people with mental illness to know is you may not get well overnight.  Your recovery will look completely different than mine. But that does not mean you are not successful.  If you are doing all the things in your life that you can to aid your physical and mental wellness such as taking medication and practicing good self-care habits, then that in itself is a great accomplishment.