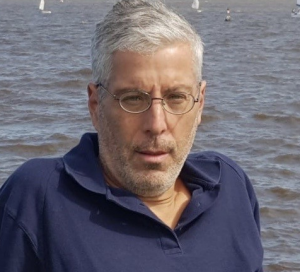 Lucas was born in Buenos Aires, Argentina in 1963, and emigrated to the US when he was 14. As a child, he recalls that Argentina was not a safe haven in terms of democracy and freedom of expression. Yet Argentina has, over the last few decades, become safer for its citizens. To this day, Lucas loves to spend time in Buenos Aires with his family members who remain there.

In 1980, Lucas graduated from Edgemont High School in Scarsdale, NY. He then began college at the University of Vermont, and very much enjoyed his years here. He had all A’s in his premed courses and was a member of the track team, setting a school record for the indoor 500m. He also was a member of a 4×400 indoor relay team that set a school record in Boston.

Lucas graduated from college in 1984 with his BA degree. He then began studies to obtain a PhD in neuroscience at Columbia University in New York, but never finished his degree program.

During 1988-1990 Lucas experienced two one-month psychiatric hospitalizations following the emergence of his first psychotic symptoms. During one of the hospitalizations, while psychotic, he stole his mother’s credit card. He intended to escape from the hospital and fly to Buenos Aires, and hoped to use the card to finance his trip. His father, a doctor, and his brother, who was a psychiatrist, were living in Buenos Aires at that time. But he was unable to escape from the hospital. Since that time, his diagnosis has been schizophrenia and PTSD.

Lucas believes that it took ten years of intensive psychology and medications to fully “resuscitate” him from his psychotic symptoms and other memories.

Twenty years ago, Lucas made a choice that turned his life for the better: he began competing in track again. He spent fifteen years doing track intervals and long-distance runs. In total, he completed about 160 veteran’s track races. Because he had smoked quite a bit during his previous ten-year struggle, his times in competition weren’t competitive, but his motivation never declined. His overall health improved dramatically. He started sleeping better, holding onto jobs (like translating and secretary work in a medical center) and reading more.

Six years ago, Lucas found another welcome turn in his life: he started meditating. He stopped running track races, even though he continues to do regular exercise. On a daily basis, he hopes to strengthen his mind.

Treatment with the rarely used medication clozapine was also key in helping Lucas to rebuild his life. As of today, Lucas has taken clozapine for twenty years with no relapse. He also believes that mindfulness has been important in his recovery.

Lucas currently works a job as a secretary in a medical center and is a freelance translator. He is fully bilingual in English and Spanish, and has worked as a translator for twenty years. In his spare time, he writes and composes collages.

In retrospect he says, “When I recall the entire process I went through over my difficult ten years of illness, I consider my being alive and even thriving as a great miracle.”