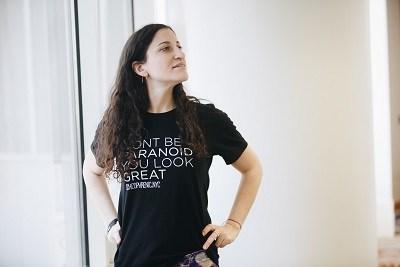 Michelle Hammer is the founder of Schizophrenic.NYC, a clothing line that fights the stigma surrounding schizophrenia and other mental illnesses.

Michelle had a happy childhood in a loving home. However, from a young age, she felt she didn’t fit in. In ninth grade, she stopped doing homework, paranoid that her teacher would criticize her work. Her mother thought that Michelle may have a learning disability. Michelle was never diagnosed.

As she grew older, Michelle’s paranoia drove her to fear her family members, friends, and even people she did not know. She had her first suicide attempt at age 15, and six other suicide attempts would follow.

Michelle began college at SUNY Oneonta in New York at age 18. At first, she felt relieved to be free of those who made her afraid. But as her fear of others returned, Michelle soon realized that the problem was with her, and not the people around her.

At age 18, Michelle’s was hospitalized for the first time. It was a negative experience. On her release, she discarded the medication, determined to never take medication again. She was also misdiagnosed with bipolar disorder.

Michelle finally came to believe that she needed medication at age 21, and was diagnosed with schizophrenia at age 22. This acceptance of her mental illness led her to take her first steps toward full recovery. She describes her diagnosis as the “best thing that ever happened to her” because it lead her to find the right medication, and eventually, to overcome schizophrenia.

At age 22, Michelle finally found a medication regimen that worked for her, including the antipsychotic medication Zyprexa. The same year, 2010, Michelle graduated from college with a degree in graphic/web design and a coaching license in women’s lacrosse. She began working as a graphic artist.

Michelle fully recovered from schizophrenia about four years later. She spent another three years trying other medications to deal with the side effects, including sedation. She continued to work as a graphic designer, but wanted to do more to make a difference, and to use her artistic talents.

In 2015, Michelle encountered a homeless man in a New York subway who appeared to have schizophrenia, alone and mumbling to himself. That day, she realized how fortunate she had been to have a supportive doctor and a loving family, which were crucial in her recovery.

Today, age 30, Michelle is successful. She enjoys meaningful relationships. In her free time, she plays lacrosse.

In 2018, Michelle began a podcast called “A Bipolar, a Schizophrenic and a Podcast” together with Gabe Howard. To date, they have released 27 episodes. You can find their podcast at psychcentral.com/bsp.

Michelle offers advice to anyone who may be struggling: If something is not right, get help as soon as possible. Don’t wait. If you need medications, it’s okay. It doesn’t mean you’re weird or different. It is better to stay on it, and if it works, don’t go off of it.