I experienced a happy, normal childhood, which was the best time of my life. I enjoyed playing sports like basketball and football. My dad coached many of my teams, and my mom attended all of my games to cheer me on. I had one older brother who I enjoy a strong bond with to this day.

I was greeted by schizophrenia at age 22. I had just graduated with my Bachelor of Arts degree from SUNY Geneseo, in 1993. Following my graduation, I moved back home with my mother. It was at this time that my behavior began to slowly deteriorate. I thought I had a microchip inserted in my brain by the government and that I was being surveilled. As these delusions worsened and intensified, I became very paranoid.

At that time, I also began to hear voices. They sounded like shouts from the skies. I could hear President Clinton speaking to me. Additionally, I thought people I saw on television were talking about me, saying where I lived and who I was. As my reality became persistently delusional, I thought the government was watching me and that I was being used in a malevolent conspiracy.

Schizophrenia has never been more trying for me than during my first onset of psychosis. Many patients experience “anosognosia” which is lack of insight, and a common schizophrenia symptom. I also struggled with anosognosia. I knew nothing about schizophrenia and never would have dreamed that a brain disorder was the source of my troubles.

After close to a year of rampant and severe psychosis, I was ultimately brought by my family, via an intervention of sorts, to the hospital. My family would have acted sooner, but they also knew nothing of schizophrenia, though they did notice my behavior was becoming erratic. It took a while for them to conclude something greater than just quirky or atypical behavior. This was the first of my inpatient admissions.

My first hospital admission was difficult. I was given intramuscular Haldol, which caused all my muscles to contract. I could not walk, and crawled my way down the hallway to find help. The staff gave me Benadryl, and the contractions stopped. I was off to a rough start!

After this first admission, I then began outpatient treatment at a community clinic. My psychiatrist started me on Zyprexa. Everyone is different, but for me, Zyprexa was awful. I felt cognitively zoned-out and impoverished, and I was tired all the time. I later came to know the medicinal slang of being “snowed.” And “snowed,” I was! Zyprexa induced a lethargy in me, and I felt no motivation other than to watch TV and sleep.

Because of the side effects and the way it made me feel, I stopped taking the Zyprexa altogether. Then, I was on no meds at all. Some months later, I again was brought to the hospital by family members who noticed my psychosis was returning.

During my second hospitalization, initially, I was very confused. I would sit for hours just watching the activity in the hospital milieu without saying a word. I was scared and paranoid. But fortunately, during this second hospitalization, my doctor refused to give up on me and was committed to my recovery. He suggested a medication I had never heard of before, clozapine. I was warned that there were many potential side effects, however, we determined I had to try it.

Three days after initiating clozapine, I felt like my healthy self again. All those around me were astounded at my return to lucid and rational faculties. A host of my symptoms subsided. I returned home feeling much better. Clozapine truly felt like a miracle.

After this second and final hospitalization, I moved on and started attending Continuing Day Treatment (known as CDT). I attended CDT for close to a year (unfortunately, this treatment modality has now been eliminated). CDT gave my day structure and the opportunity to be around others with similar problems. I learned a lot at CDT about the various mental illnesses. It provided me invaluable psychoeducation.

Finally, after months of stability on clozapine, a social worker at CDT encouraged me to apply to become a peer counselor. She thought I had the capacity to help others. I eventually became a peer counselor and really enjoyed the job.

As a peer counselor, I worked in a hospital providing peer support to patients on the inpatient psychiatric units. I enthusiastically communicated that recovery is possible. I tried to serve as a role model for patients who were struggling.

After six months as a peer counselor, I applied for full-time job at a group home for those with mental illness and was hired. After one year, I was promoted to an assistant manager. Six months later, I was promoted to program manager, and held this position for three years.

With the desire to further a career in human services, and specifically mental health, I decided to apply for a Master’s of Social Work program at a nearby university, and was accepted. I attended college full-time for two years and received my MSW in 2006. In 2009, I earned my LCSW.

I have now been a mental health therapist approaching 15 years. Over the last two years, I have written two books about my life living with schizophrenia, including my most recent book, The Essential Schizophrenia Companion. These books have been cathartic. They have provided me an opportunity to share my story with others. I write for those with schizophrenia, their families, and for the professionals who treat them. If one person benefits from my efforts, I have met my goal.

I cannot say I do not have ongoing symptoms. I do. But my recovery boils down to this. I have learned to function despite my symptoms. I have capably adapted. It took me a long time to learn to live with schizophrenia, but I have indeed learned, and I continue to refine my coping skills.

Above all, I have learned acceptance. I accept its daily provocations and I do not grumble. I know I can gainfully persist no matter the challenge schizophrenia may extend.

Schizophrenia has forged a strength in me I never knew I had. And for me, this is what I call recovery. 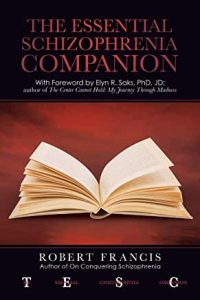