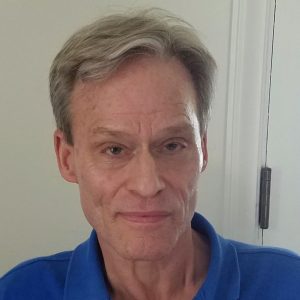 My childhood was happy. I was born into a family living in Ohio that had financial resources, and my parents deeply cared about me. I was the first-born. My family had one other child– a daughter, who was born three years after me.  My sister Karen and I enjoy a fulfilling relationship to this day.

In high school, I did very well academically, and also excelled athletically. Upon my graduation, I was nominated as the most outstanding scholar-athlete. I was also accepted at an Ivy League school, Dartmouth, where I planned to major in philosophy.

In 1972, at age eighteen, I moved to Dartmouth. I did very well in my coursework for a year. However, the majority of my friends smoked marijuana, and I began to smoke with them regularly. I also experimented with LSD.

On New Year’s Day of 1974, I arrived in Frankfurt, Germany, where I would study for ten weeks as a foreign exchange student. On my arrival, I took a train to Amsterdam, Holland, where I met a Dutch girl who invited me to live with her when I finished school. I later wrote her a letter from the States, as I was interested in maintaining the relationship. I promised to return, but never did.

During my German language studies program, I developed severe paranoia. I became suspicious of other people, worried they wanted to harm me. I neglected my studies, and was regularly smoking hash. I was living with an old German widow, and she threatened to call the police on me because of the drug abuse.

My language program was scored as pass or fail, and despite learning very little German, I passed and boarded a plane for America.

But on my return, my paranoia worsened. Everywhere I went in society, I thought people knew who I was and were “out to get me.” If I stopped into a grocery store to buy food, I was worried that the cashier was going to kill me.

None of my friends from college or even from high school knew how to react, and I lost all of these friendships. I was also unable to continue my studies at Dartmouth. When I returned home to live with my family in Ohio, I was devastated.

For two years, beginning in 1974, I worked for my dad’s printing company doing odd jobs, earning minimum wage, and not functioning well. I lived with my parents, who were very concerned about me, but didn’t know what to do. They sent me to a psychiatrist who couldn’t give me much time. He put me on Stelazine, which I stayed on for a year. I strongly disliked the Stelazine as I felt it “numbed” my emotions and feelings.

I was still taking Stelazine when I experienced my psychotic break at age 22 in 1976. That day, while at a friend’s apartment smoking pot, I started hearing voices. The first voice I heard was the voice of the girl I met in Holland.

When they noticed my behavior, my parents were even more worried, but I was already seeing a doctor and on medication.

During the next four years, I barely managed to get through each day. But despite my struggles, I finally decided to return to school. I was just two quarters away from graduating.

On my return to Dartmouth, I was still smoking pot and abusing alcohol. I soon had another psychotic episode while in my dormitory, hearing voices, and yelling back at the voices. I was taken by police to Dartmouth’s mental health center. After I was there for a couple of weeks, I was discharged, and prohibited from continuing my studies.

Fortunately, at that time, my mother intervened, desperate to get me help, and convinced me to completely stop all alcohol and drug use. I never used alcohol and drugs again.

Over the next ten years, I continued living at home and working for my dad while frequently moving in and out of hospitals due to my voices and erratic behavior. My mother and I moved to Tennessee where I participated in a program for those struggling with mental health issues, located on a farm. For fifteen years, I moved with my mother from place to place, trying multiple mental health programs, desperate for help.

Finally, at the recommendation of a psychiatrist named Henry Nasrallah, a Florida hospital offered me the opportunity to try an experimental drug, clozapine. Unfortunately, inpatient hospitalization was required for the duration of my time on clozapine. Making the decision to give up my freedom and live in a hospital for an extended amount of time was difficult, but Dr. Nasrallah and others strongly recommended that I try clozapine. They even suggested it might bring me to recovery.

Then something happened which I had thought to be impossible. After two to three months on clozapine, I began to stabilize. My psychosis and symptoms gradually started to decrease. I felt better both mentally and physically. After four to five months, I felt I was a new person.

Unfortunately, I was required to continue living in the hospital as an inpatient for two years while on clozapine. In 1989, clozapine was officially approved by the FDA, and I was finally permitted to leave the hospital and to begin a whole new life.

After my discharge, I began to dream again about finishing college. I contacted the president of Dartmouth University, asking for permission to take my last five courses at a Florida University near where I was living, and transfer them to Dartmouth. I was granted permission.

I began college at a small school in Sarasota where I scored high grades. After I transferred the credits, I graduated from Dartmouth College. It was one of the proudest moments of my life.

Following my graduation, my mother and I returned to our family home in Columbus, Ohio, where my father was still living. A doctor sent me for testing at a vocational rehabilitation facility to determine which career might be a best fit. He discovered I had a high aptitude for the legal field.

Eighteen months later, in 2007, I completed a certificate in paralegal studies. I was hired by Disability Rights Ohio in 2012 as a full-time employee. I continue to work full-time there to this day. I love my work and enjoy meaningful relationships with my coworkers.

My sister Karen still lives in Columbus and remains a close friend.

I’d like to say that if you manage your life properly and follow your doctor’s advice, it is possible to recover from a major mental illness, and have a happy and fulfilling life. I am living proof! Never give up, and keep trying various treatments until you have reached the highest level of recovery possible. You never know what breakthroughs are around the next corner.