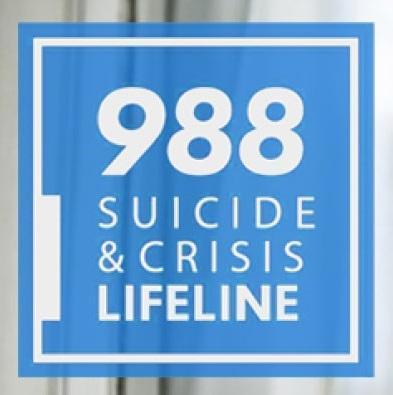 What is 988? And how will it help people with psychiatric conditions?

As of July 16, 2022, all telephone service and text providers in the United States were required to activate 988. The 988 hotline connects families with mental health professionals who are available at all hours and every day of the year. Similar to 911, this 988 hotline was created in an effort to address mental health emergencies all around the country, including the five major US territories. 988 also links directly to a veteran’s crisis line (1).

According to Dr. Margaret Balfour, “It’s estimated that [with] the 911 system nationwide, probably, about 40 million calls a year going to 911 have a mental health crisis that’s involved that could be handled potentially by 988. That’s a huge number of calls that could be diverted away from the police response system to a health‑first response where you’re getting trained clinicians on the phone” (2).

Because 988 will put the family or person in crisis directly in touch with suicide prevention and mental health crisis counselors, it is hoped that most of the crises will be resolved over the phone. SAMHSA said, “while some safety and health issues may warrant a response from law enforcement and/or Emergency Medical Services (namely when a suicide attempt is in progress), the 988 coordinated response is intended to promote stabilization and care in the least restrictive manner.” (3)

Police officers will only be dispatched to your house or other location only in rare cases.

The “988 suicide and crisis hotline” is supported by the Substance Abuse and Mental Health Services Administration (SAMHSA).

I remember a time fifteen years ago when 988 did not exist, and my parents called 911 to deal with my mental health emergency. I had gone off my medication and was acutely psychotic. Fortunately, I was not handcuffed or treated roughly by police, who respected my dignity and calmed me down, trying to make light conversation with me, which I appreciated. The crisis resolved with a hospitalization that was a turning point in my life. Since that time I have always stayed on my medication and have achieved full recovery which allows me to live a fulfilling, healthy life.

In many other cases, patients may not be so fortunate, and the outcome can be negative.

I recently interacted with a family whose son appeared to be suffering from mental health problems. He was friendly, smart, and enjoyed fixing things. In the 1990s after the launch of the world wide web, he taught himself how to create a personal website. He took his computer apart and put it back together. Additionally, he independently learned a computer language, Linux.

But what he really loved most was roller blading, skateboarding and snow skiing. He loved spending time with many friends. His life was full, and he looked forward to a bright future.

His family never dreamed that one day, he would become severely mentally ill, and would cut off all connections with old friends and family members and lose a job where he had been very financially successful, as well as very happy. In times of good health, he enjoyed the sport of hunting and collected guns, which he kept with him long into his illness.

Eventually, due to many significant and troubling changes in his life, his father called the police requesting a mental health evaluation. He believed his son was mentally ill and wanted to make law enforcement aware of his gun collection. Unfortunately, this father was largely ignored. The young man had not yet been diagnosed with a mental illness. He was not yet considered a “danger to self or others” so could not be forcibly committed to a mental health facility for evaluation.

A few months later, in the middle of a mental health crisis, neighbors called 911. The young man was shot by police that day and died instantly.

The story of this young man is unique, and yet, it is only one of an increasing number of tragic mental health events throughout the country and the world.

It is my sincere hope that 988 will save the lives of many Americans struggling with mental health crises and help mentally ill persons look forward to the brighter future—a future that many can only achieve when consenting to life-saving treatment during a time of crisis.